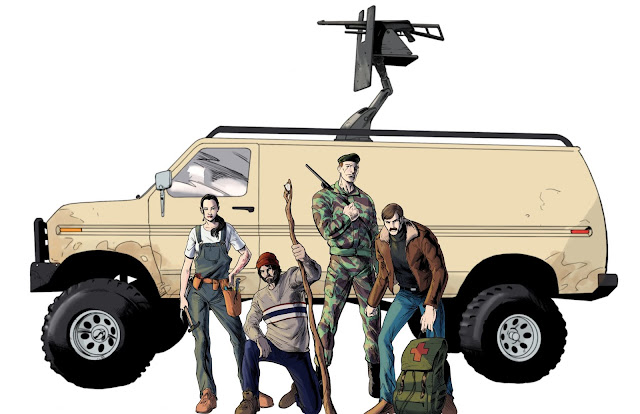 We have character art for 4 of the PCs(Marcus's art will come closer to his return to the show). The art was created by Craig Shepard, who can be found on Instagram @SeeShepDraw.

Here are descriptions for the characters as well if you're interested:

Doc is 27 years old, approximately 6’ tall, slim and long build. He has brown eyes and brown hair worn with a side part. Doc has a full, thick mustache in the style of  Tom Selleck or John Oates. He wears a Sherpa-lined bomber jacket that was his older brother’s before The End. Doc carries a med kit in an army green canvas backpack with a painted red cross on it’s top flap. He wears blue jeans and brown leather boots, and often wears turtleneck shirts. Doc has noticeably bad posture.

David stands about 6'2", shaggy longer than medium, dark brown hair, poking out from  underneath a  wool cap, length a little lower than his ears, close cut beard and mustache, wearing a knit sweater and sturdy work type pants. Also has a staff, that appears to be a gnarled tree branch with a piece of scrimshaw slightly larger than a silver dollar set in the top. ~25 years old

Jack is tall and lean, 6'3", 6'4, light brown hair, blue eyes, grooming close to military spec, hair is short and neat,he shaves every morning. Patrols in Royal marine camo which, while striking from a distance,  are showing signs of wear and fray, having been in use for ~4.5 years without replacement. Scar running from his forehead, across the right eye, and down his cheek, where he was injured by shrapnel in a helicopter crash. Has a hunting rifle slung across his back. Late 20s, early 30s.

Piper scrappy, lean, long dark hair, pulled back. Wearing steel toe boots, dark overalls, the chest pocket has pieces of scrap and little wire shaped into little insects, with a plain t-shirt. Left arm has a severe burn scar from elbow to wrist. Has a tool belt, notably with a crowbar hanging from it, but other tools as well. Wild assortment of wires and metal bits fashioned into a significant number of self done ear piercings. She is 19.